Not every bike owner gets the chance to go for a ride every other Sunday. But sometimes, the weekends turn into months, months to years. At that point, what matters most is how to start a motorcycle that has been sitting for 2 years.

Whatever the case might be, this article seeks to discuss step by step ways in getting an abandoned motorcycle that has been sitting for two years or more. It also promises to shed more light on how long a bike can sit idle without starting and, most importantly, what to do if the motorcycle won’t start even after taking a few initiatives.

How Long Can A Motorcycle Sit Without Starting?

There is no straightforward answer to this. A motorcycle should be driven at least once every other month if it hasn’t been adequately stored. And the storage process includes-

All in all, it’s best not to leave your bike sitting for longer than a month without starting it. The engine needs to be heated at least once every month to keep its components in check and burn off any condensation that may have found its way.

How To Start A Motorcycle That Has Been Sitting For 2 Years?

A motorcycle that has been sitting for two years can not be in the same condition as one currently running. Follow these processes to get your idle bikes up and running as they used to.

1. Charge Or Change The Battery

A battery that has not been in use for two years will drain itself wholly. By checking with a voltmeter, you can check if the battery can be revived by charging or not. Generally, batteries left sitting for up to two years will underperform or not pick up at all.

However, if everything checks out after using the voltmeter, you can reuse the battery again after a full charge adaptor.

A fully charged battery will have a voltmeter reading of between 12.8 Volts to 13.0 Volts. Any reading value less than this implies that the motorist should get a new battery.

After you sort out the battery issue, the next viable thing is to clean the spark plugs. You can clean spark plugs using a piece of fine-grained sandpaper and a wire brush until the pin is crisp and shiny.

It is most likely that the plugs have lost efficacy during idle moments. If that’s the case, cleaning the plugs will help rekindle the sparks in the electrodes. Though, you should also make sure that the spark plugs are not damaged. If this is the case, they need to be replaced with new ones.

If the motorcycle is sitting outside for long or in damp, wet, or cold environment, the plugs may get damp. In this case, they will not produce the needed spark in the combustion chamber. A spark plug must be at its prime for a motorcycle to have any chance of starting.

The gas tank, as well as other storage rooms, are subjects to temperature variation. Such disparity often leads to oxidation reaction and condensation. The condition is worse if the bike is left outside.

It is also essential to check the tank’s base with a flashlight before turning on the fuel pump. Because if there are traces of rust, fine particles will obstruct the vents of the Carburetor. If you notice any rust or oxidation, it’s better to remove the entire content of the tank and paint it to prevent corrosion entirely. 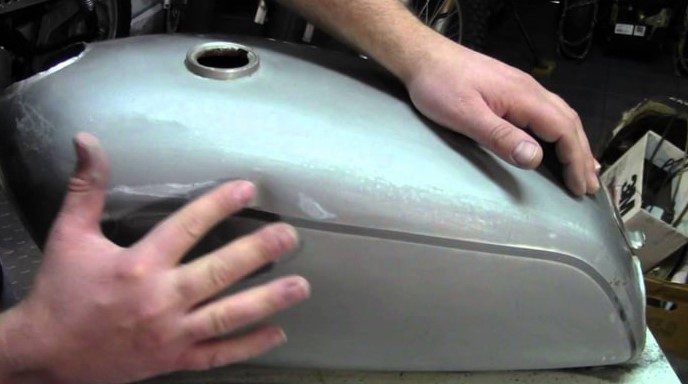 4. Replace The Former Fuel If Any

It is worthy of note that volatile elements in fuel evaporate with time. These elements are responsible for complete combustion in the combustion chamber. Without this combustion, it will be difficult to ignite the engine. Therefore, it is pertinent to replace any old fuel and ultimately replace it anew.

After a prolonged period of inactivity, the carbs are often stuck in the inlet. Also, the carbs often make motorcycles run lean or rich. Once you replace the old fuel with fresh gas, open the carburetor valve and allows some gas in to flush out some impurities.

Air filters are made from pleated papers, and their functions and efficiency deplete sizeably with time. If you’re thinking you can clean an old air filter, you’re gravely mistaken! Getting a new one is the wisest thing to do. 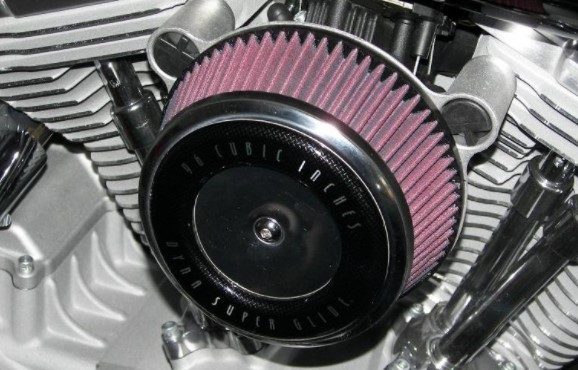 Dirty engine oil may solidify and obstruct the normal functioning of pistons and the rings. Debris around the oil filter may also do the same. Generally, the specks of dirt around the oil filter can be removed by scrubbing with a brush and some petrol. If the stains are difficult to remove, it is better to buy a new one.

After cleaning or replacing the oil filter, it is ideal to replace the old engine oil. You should not skip changing of the old engine oil for any reason whatsoever unless the former oil is still bright and fresh and with fuel stabilizer, which is most unlikely. 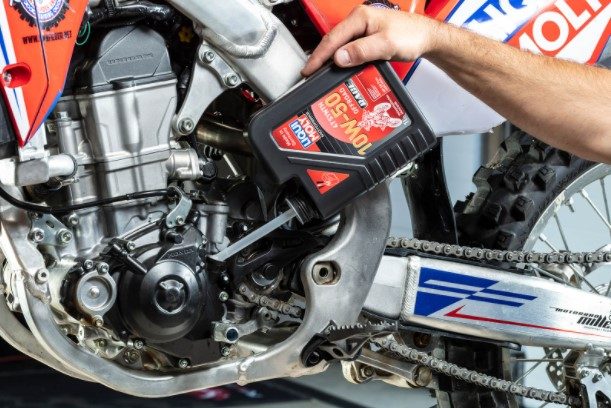 A critical liquid that cannot be ignored is the engine coolant. When the fuel is ignited in the combustion chamber, chemical energy is converted into kinetic energy. This conversion results in a lot of friction. The friction then creates a lot of heat which is dispersed by the coolant.

Just like engine oils, coolant can also wear. They need to be replaced on time to prevent overheating. Ideally, the coolant is supposed to be replaced after every two years. So a motorcycle that has been sitting for up to two years must have its coolant replaced before restarting such a vehicle.

It is a no-brainer to replace the motorcycle tires that has been sitting for two years. Tires that have been standing for over two years will most likely develop cracks and flat spots that make them unusable. Ideally, a tire has a lifespan of three years or after covering a mileage of three thousand square kilometers.

Moreover, be sure to check the pressure of the tires. It is typical for the tires’ pressure that has been standing for two years to fall short of the required pressure. The pressure of tires is measured in PSI.

Typically, motorcycle tires have an ideal pressure of between 28psi to 40psi. But it would be best to cross-check the default pressure by checking the tire’s rim. With close observation, anyone should find it boldly written there.

To check the condition of the brakes:

You should also check the disc pad and shoe pad for potential wear and tear if they do. 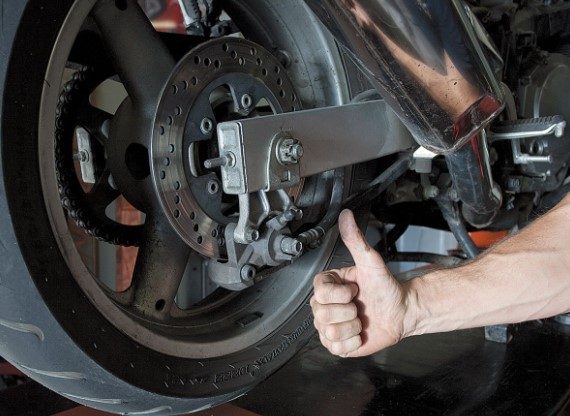 While still at it, check the level of brake fluid. Typically, the brake fluid is supposed to be changed every two to three years. Changing it entirely with a fresh one for a motorcycle that has been sitting for two years is not a bad idea.

Additionally, you should care for all the electrical parts with anti-corrosive spray. Completely clean the coil and the wire connected to the spark plug. Treat other joints like the footrest, handle, kick starter, and others using the same spray.

Check if the chain is becoming loose and hard. Cleaning and lubricating the chain is one of the simplest tasks but is mostly ignored by many. Ensure to clean it up and apply lubricant on your motorcycle chain before taking it out for a ride. 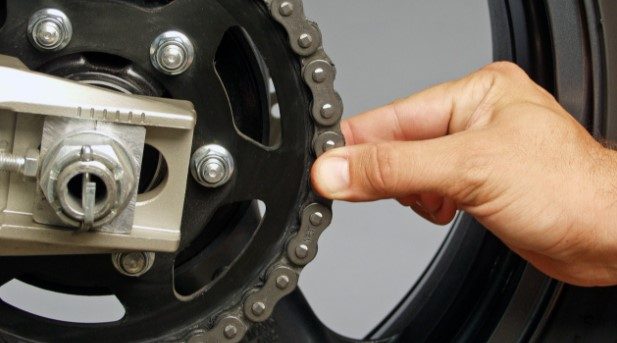 For the motorcycle engine to work correctly, it needs a good mixture of air and fuel to develop the required energy required to power the motor. Such a combination occurs in the carburetor. It is necessary to check for gas residue and other debris that might hinder the Carburetor from performing at its best which will, in turn, slow down the engine power.

Temperature changes, moisture, sunlight, and humidity affect and change the appearance of motorcycle parts. Metallic parts might suffer from rust, while rubber parts brittle. If preventive measures are not taken, a great-looking motorcycle will gradually become a shadow of itself.

Corrosion usually occurs near the exhaust and gradually affects other metals from the inside, making them fragile and hollow. Carefully inspect the exhaust for cases of corrosion. It would be best to take preventive measures to keep the motorcycle free from rust.

Finally, after all is said and done, it is time to test the engine and take it for a ride.

Take it easy at first. Bear in mind that most of the engine’s metallic parts that require greasing may have dried out. So allow it to idle for a while for all the vital components to get lubricated, including the clutch. While waiting, take out time to check the electrical fittings. Make sure the brake lights and indicator lights are all working perfectly.

What To Do If The Motorcycle Won’t Start?

Having followed all the steps and guidelines outlined above on how to start a motorcycle that has been sitting for 2 years, maybe it still refused to start. For instance, after cleaning the Carburetor entirely, the bike still may not respond to kickstart.

So now, it’s time to try the manual push-start method.

How to push start a motorcycle:

If the bike is yet to start at this time, you need further troubleshooting. The engine may not always be the at the fault. The shut off and failure to start could result from a bad battery, faulty spark plug, or bad ignition coil.

So, what’s with a bad motorcycle battery?

If the motorcycle shows no sign of life after numerous trials, then take a moment to look at the batteries. A battery with a low charge will often lead to a low-power bike that will later stop starting at all.

If you suspect this to be why the bike is not starting, you should try charging or changing the battery to see if it would salvage the situation.

Apart from the battery, the spark plug is another culprit for why the bike is just not starting. Check for any physical alterations on the plugs, either insulators or electrodes. If they appear in good condition, you can easily test them.

How to test a motorcycle spark plug?

Plugs can be tested by putting them into the cable cap and holding the ends up against the metallic surface of the engine. Try to start the engine and see if it creates a spark. Suppose it doesn’t, then there is no other choice than to get new ones.

If the bike will turn over but will still not start, the problem might be with the bike’s ignition or fuel. Over time, fuel begins to erode and will not combust, making the engine crank but not start. In this case, one only needs to replace the old fuel with a completely new fuel.

After trying all the suggestions discussed on how to start a motorcycle that has been sitting for 2 years, the bike may still fail to run. Perhaps it’s the best time to seek professional advice and services.

Trying out all these methods first will help rule out any possibility of a simple solution. With this in mind, any money spent to get your gears up and running will be worth paying.