Engines as we know are the most vital part of a motorcycle, and Harley Davidson has done an excellent job of delivering high-quality motorcycles with newer and top-notch engines and parts. Precisely, each invention coming out with better efficiency and productivity. Shovel Head vs. Panhead: which one is better has always been asked by Harley users, and that is exactly what this article aims to answer. Hang on!

The pan head was an earlier invention by Harley-Davidson, it is called so because it resembles an upturned saucepan. It came into the market immediately after the Second World War, from 1948 to the 1965. The shovel head, on the other hand, is more recent than the pan head. It ran from the mid-60s to 1985. It is called a shovel head because the rocker covers resemble a coal shovel turned upside down.

Shovelhead engines are advanced pan head engines. Overview of shovelhead engine is very necessary as it helps us  picks out the improvements from the previous engine types. Her hey features include: 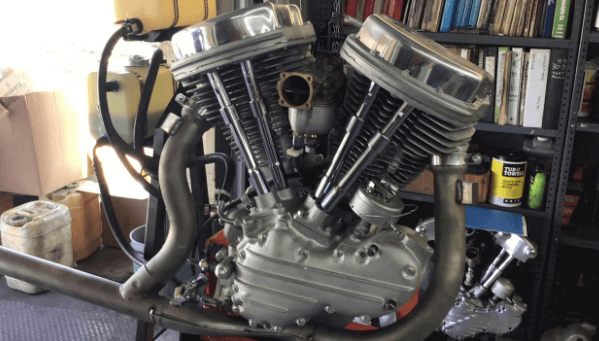 Shovelhead vs Panhead: What Are the Differences?

There are several differences you can notice between the Shovelhead and the Panhead. I’ll discuss the major ones below.

Which Is Better- Panhead or Shovelhead?

In the clearest of terms, Shovelhead is better than Panhead. Shovel Head can easily be called the advancement of Panhead as Harley- Davidson worked on the limitations of the Panhead fo release the shovelhead. It has higher torque than the pan head engine, increased horsepower, etc. In addition, oil leaks are also non-existent on the shovelhead engine.

Motorcycles have come to stay! Indeed cars provide luxury, but the experience of a motorcycle is unbeatable. In choosing a motorcycle to suit your need, it is important to check for specifications that will give the desired experience. This desire then raises the question, “Shovelhead vs. Panhead: which one is better?” This article answers the question. Shovelhead is better.