People perform burnouts for two major reasons. The first is to get their tires heated up and sticky very quickly to perform drag racing, the other reason is to show off their motorcycle freestyle skills. Knowing how to do a burnout motorcycle correctly and properly will help to ensure the safety of both the motorcyclist, the motorcycle, and other people around.

A burnout on a motorcycle is a trick or a stunt in which the motorcyclist rotates the rear tires while keeping the whole bike in one place or moving at a controlled speed. It is a popular sight to see racing riders performing burnouts as a form of celebration after wins. It is very dangerous when not performed properly as it can cause injuries to the rider and other people around.

Burnouts are generally illegal when done on public property. It is widely believed that the reason for it being illegal on public properties is due to the fact that it is usually an invitation to street racing. Another reason is that it is believed to cause damage to public roads as scratches on tar can be observed after burnouts on some road tracks.

Also, some states in the US see burnouts as reckless driving. This is because it doesn’t just pose danger to the motorcyclist, it is also dangerous to the people around the area where the burnout is being carried out.

Doing burnouts on private properties is also a dicey affair, as owners of private parking lots can press charges if they don’t like it or find it dangerous. Although it is generally illegal to do burnouts on public properties, there is no clear-cut punishment for defaulters.

Where Can You Do A Burnout?

Doing burnouts on public properties is illegal. That out of the way, burnouts can be done on drag strips and private racing tracks. In Fact, it is a requirement before drag racing to carry out a burnout as it helps to increase traction by raising the temperature of the rear tire of your motorcycle. 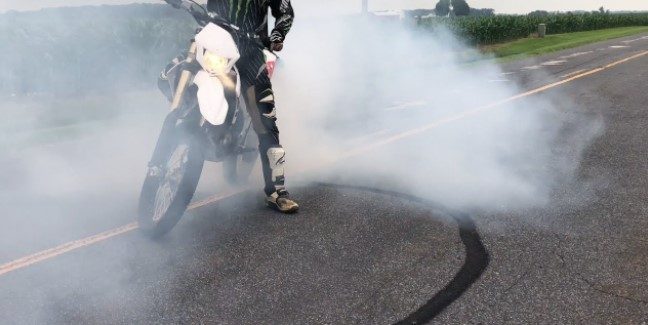 Apart from drag strips, you can carry out burnouts on your own private property. You could build your own personal track and carry out as much burnout as you want. Then, the only problem or complaints you’ll probably be reported for will have to do with noise or “disturbing the peace” complaints. If your property is far from a residential area, then there is absolutely no problem.

How To Do A Burnout Motorcycle?

A burnout is a trick where a motorcyclist revolves or rotates the bike’s rear tires while keeping the motorcycle in one place or moving at a controlled speed. Burnouts usually cause a lot of smoke and noise when done.

Before learning how to do a burnout motorcycle, there are some safety tips you need to take note of. Some of these tips are;

Learning how to do a burnout motorcycle can be compressed into two basic processes. The first of which is holding down the front brake, and the second is hitting the gas. Below is a step by step guide on how to perform a burnout on your motorcycle.

However, the clutch lever can be on the right handlebars in some cases. Suppose this is the case, apply the same measures above.

It is advisable to use only the middle finger while pulling the brake lever to the rear. This is mainly so that the rest of the hand can help rev the engine throttle. If the bike’s throttle lies on the left side (as is often the case), use the left middle finger to press the brake.

Note that the bike should have been shifted into first gear. This is a simple thing to do. Using the foot, press the gear shift pedal. The chances are that the bike will automatically shift into gear. To prevent this, use the left hand to engage the clutch.

To effectively do this, use the right hand to turn the throttle down. In the same vein, ensure the repetitions per minute (RPM) gauge is under close watch. Then check if the arrow has made its way towards the red line. While revving the engine, start from a relatively low pace. This will prevent the bike from going into gear mode and propelling itself.

Also, before putting the bike in gear mode, do well to warm up the engine. This will cause the tire to rotate at a considerably high speed to get some traction.

Are Burnouts Bad For Motorcycles?

Apart from being illegal and dangerous, when not properly done, burnouts are extremely bad for motorcycles. This is because they can cause a wide range of damages to a motorcycle. These damages range from tire damages, clutch damages, overheating, etc. 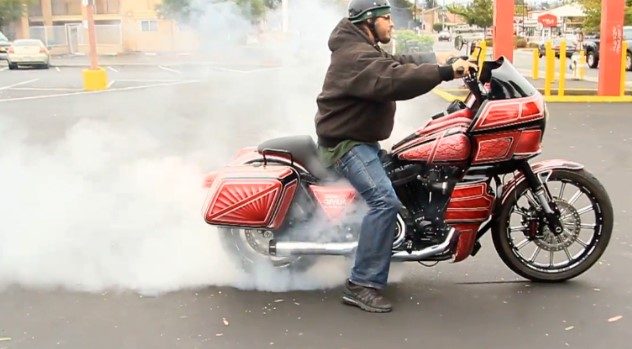 Tire damages are the most obvious damages incurred during burnouts. Because of this reason, most experienced riders prefer to perform burnouts using old or already worn-out tires so as to reduce cost as motorcycle tires are expensive.

Also, doing burnouts for too long on a motorcycle can lead to overheating of the engine which can cause engine damage. Apart from engine damage, carrying out a burnout for too long can cause the tire to build up enough heat to cause a fire. Also, a badly done burnout can put too much pressure on the brakes, swing arms, and bearings of a motorcycle which is not good.

Apart from being used to increase the temperature of tires before drag racing, burnouts are a popular form of motorcycle stunt performed by riders to show off their skills. It is popularly done after bike races to celebrate wins.

Learning how to do a burnout motorcycle properly can go a long way to ensuring your safety and that of others around you. Also, when burnouts are not properly done, it can cause damages to the tires, clutches, brakes, and even the entire engine of the motorcycle.