The importance of using the right oil for your 4 stroke motorcycle cannot be overlooked. This is because the oil keeps everything working smoothly and reduces wear on the engine. But one of the common questions I get asked is, “can I put car oil in my 4 stroke motorcycle?” This is the right question to ask when you need quality oil, and you can only find car oils in the store.

The truth is that you can use car engine oil on your 4 stroke dirt bike, quad, or other machines without messing it up. Well, I have tried this quite a few times, and I haven’t seen any drop in the performance of my motorcycle.

What’s more surprising is that I find car oil a better choice than some bike-specific oil in some cases. Using car oil on your bike will give you better protection, quieter operation, and a longer service interval.

However, while it may be the right thing to do, I suggest you not use it for a longer period on your motorcycle. Also, there are some setbacks you can experience with using car oils in your motorcycle, and it’s discussed in this article.

4 Stroke Motorcycle Oil vs Car Oil: What Are the Differences and Similarities?

To understand the differences and similarities between motorcycle oil and car oil, first you need some basic knowledge. So, first read the sections below before we dive deep.

What Is 4 Stroke Motorcycle Oil? 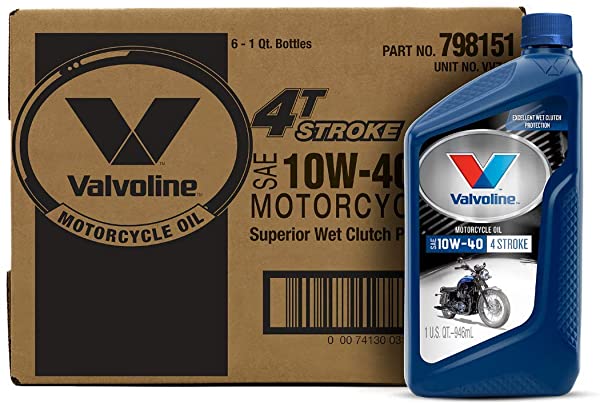 Some advantages of using 4-stroke motorcycle oil are listed below.

In addition, motorbike oils that meet the API SF grade are generally likely to be acceptable in 4-stroke engines. These oils are formulated with sufficient detergents to protect the engine from sludge and deposits.

However, they are specifically intended for service fill or maintenance use in 4-stroke crankcase applications.

What Is Car Oil?

Car oil has a lot of importance on the overall general performance of a car, starting from its engine, lifespan, and mileage. Unfortunately, the setback with motor oil is that it thickens, breaks down, and collects microscopic dirt particles as time passes.

So, you need to constantly flush out and replace it with new fuel to keep your engine in good condition. Fresh and clean oil helps move engine parts smoothly and helps reduce friction.

Therefore, changing your car oil regularly ensures that you have the right amount of fresh, clean oil in the engine. Without it, your engine will collect dirt and become less efficient or even break down completely.

Similarities and Differences Between Stroke Motorcycle Oil and Car Oil

Let us get to know the similarities and differences between the two oils.

There are a lot of similarities between car oil and motorcycle oil. For example, both are made from mineral spirits that have been mixed with other additives to make them more viscous. But there is a difference in their viscosity.

Their Colors are Not Too Different

Both types of oil are also clear when they are cold but become cloudy when heated up. Both oils thicken as they get warmer and start to gel together.

The composition of Stroke Motorcycle Oil and Car Oil is very similar, but they are different in some ways. Both are made of oils and additives. The oils are usually a blend of mineral and synthetic hydrocarbons that are derived from petroleum. The additives are what make them work better than other types of oil.

The difference between Stroke Motorcycle Oil and Car Oil is that the motorcycle oil has more friction modifiers than car oil does. This helps the engine run cooler when it’s being used at high speeds or under heavy loads, which is what happens when you’re riding your bike on a race track or highway.

Motorcycle Oil is For Motorbikes, Car Oil for Cars

Stroke Motorcycle Oil and Car Oil are very similar in many ways. They’re both made to lubricate internal engine parts, but they also have some key differences.

So, stroke Motorcycle Oil is designed to withstand extreme temperatures and high RPMs, so it’s better for bikes than cars. In addition, it has a higher viscosity than car oil, which means that it flows more slowly and helps the engine operate at a cooler temperature. This can reduce wear on your bike’s engine.

In addition, car oil is made of lighter molecules than motorcycle oil, which means it flows more easily through the engine to keep it cool. It also has special additives in it (called detergents) that help clean out dirty parts of the engine, like valves and pistons. This helps extend the life of your car’s motor.

One of the differences between stroke motorcycle oil and car oil is the temperature at which they operate. Stroke motorcycle oil is designed to withstand much higher temperatures than car oil. This means that you’ll see a lot of motorcycles with custom-made engines that can handle the heat, while cars don’t need this kind of performance.

Both oils have additives, but the type of additives used in motorcycle oil is much different than that of car oil. For example, car oil uses more detergents, while motorcycle oil has more friction modifiers and a higher viscosity index

Can I Put Car Oil In My 4 Stroke Motorcycle?

You can put car oil in your 4 stroke motorcycle as long as the oil you are using meets your bike’s specifications. If you feel more comfortable using car oil on your motorcycle, then go ahead and use it. Just be sure to remember that the two oils are different.

One major reason why most people use car oil is that it’s easier to find than motorcycle oil. In addition, most gas stations sell car oil, so if you run out of motorcycle oil and need some more right away, then you won’t have any trouble finding it at a gas station near where you live or work.

However, there are some downsides when using car oils instead of motorcycle-specific ones:

Overall you need to know that the right oil will always help to lower wear and friction, reduce waste heat, and help keep your engine clean to ensure its efficiency. In addition, the better the oil, the longer your engine can live.

How Often Should You Change The 4 Stroke Motorcycle Oil? 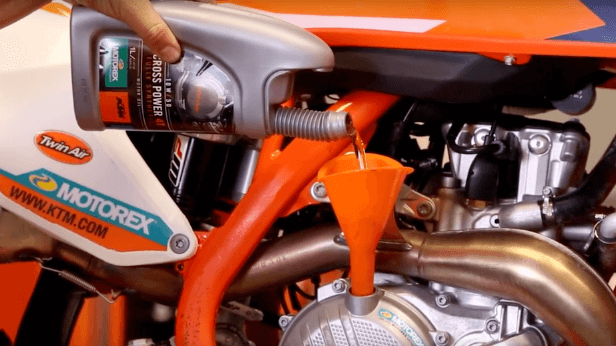 This is a fairly simple task requiring only a few tools such as an oil pan, a quality adjustable wrench, and an oil filter wrench (optional).

The thing is, the frequency of motorcycle oil and filter maintenance depends on the type of motorcycle you have. It doesn’t matter if you ride in a lot of stop-and-go traffic, and how much time you spend on your bike.

In general, your motorcycle needs regular oil changes to keep it going. On a 4-stroke bike, the engine oil lubricates the crankshaft and piston while keeping the internal gears shifting smoothly. So always ensure you check the engine oil and top it for the best performance.

What Happens if You Don’t Change Your Engine Oil?

If you do not change your oil at the specified intervals, you will risk getting trapped carbon buildup in your engine. As a result, it will gradually get dirty and eventually stop functioning altogether. 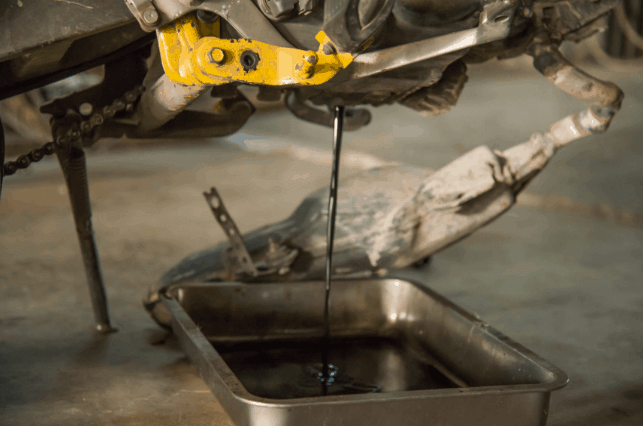 Eventually, old oil gets dirty and loses its lubricating properties. As a result, the engine will not operate efficiently or last as long if you fail to change the oil regularly.

So, it is important to change your motor oil regularly, about once every 5,000 miles, depending on what type of car or motorcycle you drive. An oil and filter change takes less than an hour and can save you a ton of money on your next mechanic bill.

No one wants a noisy engine. However, an engine that is noisy and running rough could indicate engine bearings from lack of oil. If you hear knocking noises or other strange sounds, turn off the engine, check the oil level and add oil if necessary.

Moreover, if you don’t change your oil on time, engine parts won’t be properly lubricated and will wear out quickly. That is why it’s important to change the oil in your car when recommended.

You should schedule an appointment for any necessary repairs as soon as possible to avoid engine damage.

If you don’t change your engine oil, your car can suffer several problems. Overheating is one of the common issues caused by the old engine oil. Also, if it gets hot enough, you could wind up stranded on the side of the road waiting for a tow truck.

The reason for overheating is that your car engine produces a lot of energy continuously to run your vehicle. The process involves combustion and generates a lot of heat absorbed by the engine oil.

If you do not change the oil at the right time, it will become thick, which cannot absorb the heat from the combustion, resulting in engine overheating.

Your engine, the heart of your car or motorcycle, has many moving parts. When those parts rub together and heat up, their friction produces wear down. So, if you neglect to change your engine oil for a long time, you’ll end up with insufficient lubrication, which can weaken or even destroy your engine.

While I was curious to find an answer to “can I put car oil in my 4 stroke motorcycle?” I have heard several stories about how people damage their bikes. I do not want you to join the list of those and end up damaging your motorcycle due to an avoidable mistake.

To sum up, you can use car oil in a 4-stroke motorcycle, however it’s best not to make it a regular practice. Also, you need to change the oil every 3-6 months.